Seems like when I was a kid all lawn mowers either had a Briggs and Stratton or a Tecumseh engine. Now there are engines I’ve never heard of. Maybe you could dive into who is making what and what happened to the old manufacturers.

Ahh. Where have all the flowers gone?

The history of the lawn mower small engine is far too diverse for this guy to outline. We’re talking historian stuff here and there are lots of internet forums out there dedicated to each and every one of those oldies that I’ve never heard of. I’m sure the Montgomery Ward Thatcherator Delux Model “J” was a dandy. I don’t know why they don’t make them anymore, but we all know what happened to “Monkey Wards”.

But as far as what happened to most of those trusty old small engine brands, its the same thing happening today: they were assimilated by some other part of the Lawn Equipment collective.

This guy bought that guy who was bought by those guys who were ultimately confiscated by the government, sealed in a wooden crate and stored in a massive warehouse where their “top men” would look into it.

But the truth, of course is not that far off. It’s a competitive world and when you see a brand new brand pop up on the horizon, chances are someone wants to get just big enough to be noticed by the big boys so they can sell out and retire. Can you say Ferris? Can you say Zipper?

Now, the question as I understand it is “What are the common brands of small engines these days and where do they come from?”

All right. Let’s take a look at the top few.

In 2000, the company acquired its consumer generator business from the Beacon Group (whom had previously purchased the Consumer Products Division of Generac Corporation forming Briggs and Stratton Power Systems. Then in 2005, Briggs and Stratton added Simplicity, Snapper and the name, marketing rights and product designs of Murray to the family. All separate brands, all under the same umbrella.

Easily, the most common brand of engine on the market today,  Briggs offers a complete line of four cycle, vertical and horizontal engines. Are they good? Undoubtedly. Are they the best? That’s speculative. But more to the point, they’re the most frequently encountered engine today and that alone speaks volumes for the market itself. Frequency necessitates availability of parts which is why so many people have them, and so many manufacturers like them. They’re easy to start and easy to maintain.

It’s all about support and Briggs (and the aftermarket parts manufacturers) are providing it.

Tecumseh was a dilly up until December of 2008, when the company closed its engine manufacturing division. In 2009, certain assets of the Tecumseh engine business were purchased by Certified Parts Corporation. CPC ultimately joined forces with Liquid Combustion Technology in 2010 to reintroduce several Tecumseh engines.

Currently, LCT is the existing Tecumseh entity, though full production of the Tecumseh line is still a point of conjecture, there is still a small army of Tecumseh engines and engine owners out there looking to keep their mowers running.

Hopefully, something will be done to revise the brand. There are some dyed in the wool Tecumseh men out there. I’ve met them…and they’re waiting!

As far as support goes, there is an entire sub-culture of authorized Honda dealerships out there ready to help.

But Honda is a massive organization, so while getting that “down home” feel is not something you should expect, but what you can expect is a great engine with a sterling reputation and effective support.

It would appear that at a very young age, John Michael Kohler had decided that “if it can be made, I will make it…and sell it… EVERYWHERE”. And with the invention of his patented Horse Trough/Hog Scalder/bathtub; Kohler was on the road to success.

1920 saw the beginnings of Kohler engine with the Kohler Automatic Power and Light 1500-watt Model “A” generator.

Jump to 2007. Kohler purchases the Italian Diesel engine company Lombardini, adding diesel engines up to 65 HP to the menu.

Later that year, Kohler created a joint venture with YinXiang Ltd. (in Chongqing, China) to manufacture small gasoline engines for import into the USA.

Just like Honda, the Kohler empire is still going strong. Parts availability is good for the newer stuff, but like Tecumseh; the engines tend to outlive the service. Well, what can you do?

Folks in the industry can look at an engine and determine the brand by appearance. Heck, many consumers can as well. This subconscious recognition works to the knock off manufacturers advantage. It sells engines on assumption alone.

Here’s how it works.

So, when the patent runs out on an engine for a company like..oh, say…Honda for example. That allows foreign companies to kick their version of that engine into production.

And when they’re done, their version of the original engine will often resemble an actual Honda so closely, that it takes a professional to recognize the differences.

But to the average consumer, it looks like a duck. Widdle waddle. Then American retailers; who understand that most consumers would prefer not to spend an arm and a leg to get their old machines up and running again, will snatch these things up and sell them like hotcakes, allowing the consumer to assume that what they are getting has the same quality as their genuine doppelgangers.

So, when the lights dim, the music swells, the salesman starts doing the “Hondaesque Shuffle” and that shiny blue (blue?) engine is sporting a price tag that can’t be beat-

“What’s that young fella? Will the engine mount up? Well, heck yeah! That engine will mount up juuuust fine!”

So you get it home, bolt it up and off you go. Kindlin’ starts flyin’ and all is right with the world. Who cares that the owners manual is a three page photocopy, written in Cantonese! We got FIREWOOD!

Besides, all them engines are made in China anyway, ain’t they? 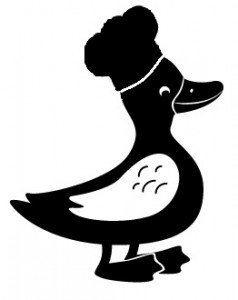 So we jump forward to the sixth cycle in the year of the chicken and your big, blue beauty is hacking but it ain’t quacking.

The fuel lines look like a jigsaw puzzle that’s about to fall apart, your fuel tank has more crack in it than Marion Berry and something is mounted to the side of the air filter that resembles a rubber kazoo.

So, armed with your model number, you take to the internet to find parts, but everything you run into is starting to look a lot like your manual.

Remember? The one you couldn’t read. It doesn’t matter. It was for a toaster oven anyway.

The further you dig, the more often you’re seeing things like import quantities in the four digits and phone numbers to consulates and the office hours for a harbor master.

Good news is, they are more than happy to send you what you need. A palate of what you need. All you have to do is contact “Carl” Xiujuong-zou at Her Majesties Export Company, Ltd. in Kowloon.

“But I don’t need 1500 fuel tanks.” You mutter, clicking furiously.

Ducks! Whadda ya gonna do? 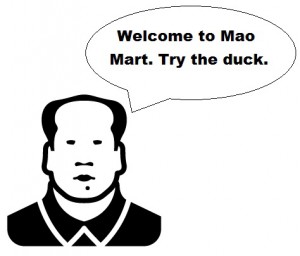 Hours later, you stand there in your yard with your fists on your hips… staring at your big, blue paperweight when your neighbor comes over to help.

“Oh man. You got one of them Chinese knock offs, huh?”

…and your stomach drops.

Cut to the local technician who will (and I’m not joking here) scowl and shake his head at you when you show him what you have.

Note: Scowling is an approved practice in the small engine repair industry. It keeps us from losing our minds.

Oh, and if you took your engine to Larry at Duluth Lawn and Mower, he’s gonna laugh at you. To your face. Out loud!

The technicians mouth will offer condolences, but his eyes will say “Cheapskate, huh?”.

“It’s not a duck, it’s a turkey.” He will point out that the model number on the mower has three digits that are more squiggle than number. “If you want to track down the parts for this thing, I’ll be happy to try to fix it. But I don’t have time to find them. If I have to track them down, it’s going to take some time.”

You will load it up in your truck with that “The hell you say.” attitude that makes you the firecracker that you are, and you’ll make a bee line straight for the BigFarmHarborWoodsToolFreightDepot over by the mall. Receipt rippling in the wind, you’ll storm in and demand satisfaction.

But they won’t help you.

They can’t help you.

They don’t speak duck or turkey or Mandarin; and they never claimed to be a service center for those engines. They just sell them.

And to add insult to injury, your particular bird isn’t even for sale any more. It was discontinued halfway through the year of the pig.

But they’re happy to sell you another engine. (Is that music?) This one kind of looks like a green Briggs and Stratton with a George Foreman Grill mounted to the valve cover. (The spotlight glows). The salesman grabs his hat and cane. The lights dim, the music swells and….

Well, you get it.

Grandpa said it. Dad said it, and it’s still true today. You get what you pay for.

Don’t be surprised if they cost more than that shiny purple dandy down at the flea market. It’s not affordable, its CHEAP.

Remember, when it comes to engines, the point is longevity; which is not a big word in Chinese exports. You have to be prepared to invest in its future and that is the bottom dollar.

Sorry. I gotta duck out of here.