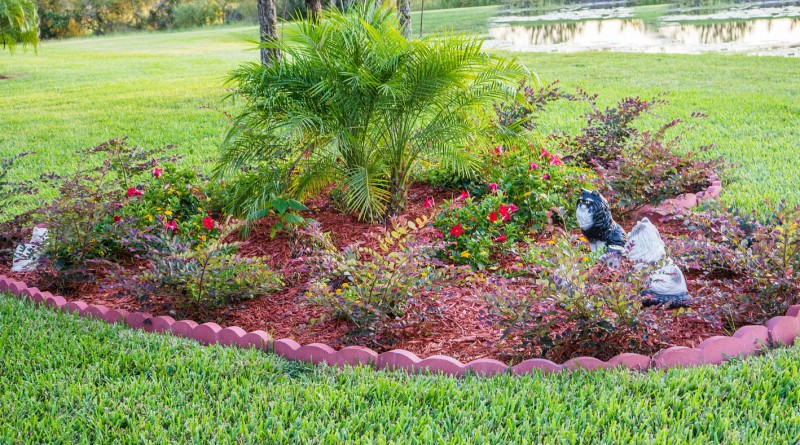 In our third and final installment on lawn edging, we’ll cover two areas of equipment: Manual and Power edgers.

Archaeologist recently uncovered evidence that early humans would employ sharpened dinosaur bones (borrowed from their neighbor) to establish and maintain territorial markings. These early “edgers” were often attached to lengths of wood and ground into flat, rigid plates.

And since then, we’ve been coming up with bigger, better and more expensive methods of cutting lines in dirt.

A wedge on a stick. They’ve been using them since man first decided he needed to move some dirt and he didn’t want to use his fingers. Look on the internet and you’ll see every variation that the human imagination can come up with. They angle the stick, add a step, narrow the wedge. Widen the wedge! Straighten the stick out again, then bend it a bit more. The blade is square, now it’s round, now it’s pointy.

Which sandwich bag works best for your sandwich? It’s a matter of preference.

A sharp stick used to work, but that wore out the hands and shoulders. A hoe came alone, but that required some whacking and..well, who wants to whack when you can just put gravity to work and step on the thing?

It’s a taco! It’s a tostada! (flat taco). It’s a burrito! (rolled up taco). All of those edging devices are like the menu at Taco Bell. Everything is the same dang food just piled up differently!

I must digress here. I had never heard of edging shears before researching this, but I guess it stands to reason. Edging shears are exactly that… lawn scissors!

And if your eyebrows are raised right now like mine were, let me just share with you a great video showing what a true artist can do with a set of edging shears. I love this video and I hope you will too. Enjoy.

But before we move on, let’s clarify something. We’re not talking about trimming here. Trimmings is when you turn your trimmer on it’s side and you cut the grass along your curb so it looks nice and neat.

No. What we’re talking about here is removing dirt so the grass won’t grow there any more.

So when when you introduce powered equipment into the mix, what you’re saying is “I want to move a lot of dirt really fast in a way that won’t tucker me out.”

And we can do that. But there are a few things to discuss when considering which way to go.

Gas engines are louder than electric. There it is. Have you heard about how high the decibels can get with these things? Of course you haven’t. You haven’t heard anything…because they’ve destroyed your ears!

With an electric edger, you’re still dealing with the blade striking solid surfaces so sound can still be an issue. Not as bad, but still there.

The power edger is a machine that forces a spinning blade through soil, rocks, roots, grass, vines, and occasionally concrete (if your aim is off.) Actually “blade” is a bit of a misnomer. The edger blade is a blade much like a baseball bat is a butter knife. You want some butter on your toast? LET’S PUT SOME BUTTER ON THAT TOAST!!

The edger blade is a flat edged strip of tempered steel that is forced through the soil, hurling it out of the way. Yes. Hurling.

And of course, they dull quickly and break frequently, specially when they haven’t been replaced when they should which is why every year there are countless personal injury and property damage claims reported. Poorly maintained machines, overused blades or just plain old human negligence..we got it all.

These machines take a beating, there is no doubt about that. In fact, in the lawn care equipment kingdom, edgers tend to retire quicker and earlier than most. And when a machine reaches the point where it is structurally compromised, you’re working on borrowed time.

Many electric edgers are made with a lot of plastic. They’re light, easy to move and they look really cool hanging in your shed.

However, with electric machines, vibration, exposure to moisture and general use will eventually run the machine down. Luckily they tend to cost less than a gasoline powered unit, which is fortunate because when it breaks (and it will break), you’ll be hard pressed to find anyone who can or will repair it.

Gasoline powered units are heavier, louder but are often built to be repaired. They tend to be sturdier, constructed of metal with minimal plastic but they do the exact same job as their electric cousins. They are more expensive as a rule, which doesn’t necessarily mean they are built to last.

Actually, let me back up a bit.

For an electronic edger, you’re looking at around $70 for a crap-o-matic 2000 and it just goes up. Don’t get me wrong, there are some dandy’s out there. Just do your homework and understand going into this that you are not buying that one, fluke of an electric edger that can run along side any gas powered unit.

That miracle machine does not exist.

So, given how “affordable” these can be, are they really cost effective? If you consider buying a new one every year and a half as a bargain then sure.

With the gasoline powered units, you’re probably looking at $190 for a cheapo going all the way up to $2000 plus. Expensive? Yes. Subject to potentially expensive repairs? Yes. Worth it? You tell me.

Look for all those bells and whistles…then run the other way. They’re super duper but if whatever that snazzy little feature does…if it doesn’t contribute to moving the dirt efficiently, increase gas mileage, or make you a sandwich when you’re edging then I say dump the flashy gadget machines.

Why do I say that?

People who use these things like their supposed to be used and know what to look for purchase, rugged, stripped down machines that do what they are designed to do…which is to move the dirt so the grass won’t grow there.

Ok. So I’ve rambled on about this long enough. If you take nothing else from this little series, take this…

If you are a home owner and you bought an edger, it was because you wanted one…not needed one. And that’s cool. You be you!

If you’re looking to buy one; shop around. Don’t be a ‘carny’s dream’. Find the right machine that does the job it was designed for. You don’t need a headlight on your edger.

If you know the limits of your machine, you’ll do fine.

If you know the layout of your property, you’ll do just as fine.

And finally… be safe. That is a blade, it is spinning with enough force to blast it through hardened soil. It will eat your face if you let it.

That’s it for me. Hope you enjoyed it.

I’m off to not edge.