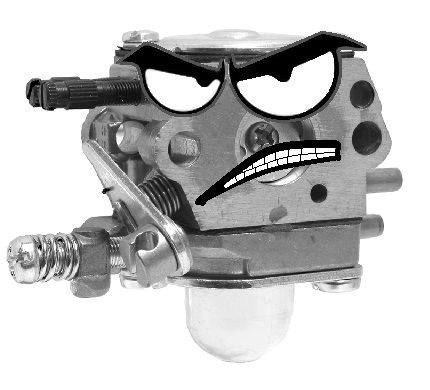 “An article on carbs would be helpful. How to adjust them and clean them…”

It seems like at least once a week, we get a guy in here who is experienced in multiple facets of auto mechanics. This is a guy who can strip down and replace the posi-trac rear-end on a Plymouth in record time! With their eyes closed! With a full bladder! I know this because they always make a point of telling me so.

But then they drop a chainsaw on my counter. Then they stand there shamefaced and chagrined.

“I think it might be the carb. I don’t know nothing bout these things.”

Double negatives. You gotta love them.

Now, I’m saying this, not based on personal experience but out of sheer ignorance of automotive mechanics. But, how can a man who knows how to rebuild an automobile engine with a pair of pliers and a stick of gum be completely lost on a two cycle carb?

I mean, car stuff is so much bigger and more complicated with more stuff and moving thingy’s and…..well… stuff.

Clearly I know enough to know I don’t know enough. There’s clearly a difference, and I can accept that. But, when it comes to cleaning and re-building their little cousins…even I can figure that out.

To give your two cycle carburetor the once over, knowing what goes where is the name of the game.

Disclaimer: The information provided below is not presented as the one and only, end all-be all, works the same every single time (so its our fault if it doesn’t work) instruction manual on how to repair every two cycle carburetor ever made. This is a generalized tutorial, which will (hopefully) provide a familiarization with the components of the basic, two cycle carburetor.

I feel compelled to say that because from time to time we run into folks that seem to believe that because its on a web site, it somehow re-writes reality. The truth is, you have your carburetor in hand. I can’t see it, so go with what you know. When in doubt, give us a shout.

Compressed air to dry the carb, or a clean place to allow it to air dry

There are probably lots of other tools designed to complete

this task. I don’t know that they are truly necessary…maybe they are. But so far, I’ve managed to muddle through without most of them.

Lets start by removing the carb from the equipment.

This will most likely involve removing the air filter and air filter base and disconnecting the fuel lines and possibly a cable.

Often, we’re looking at a couple of bolts holding the thing onto the engine. Just be careful, don’t strip the bolts. When in doubt, give us a shout.

Be mindful of any cables or fuel lines that may be attached to the carb. You’re going to have to reconnect those, so it might not hurt to mark them before removing them.

The outside of your carburetor is probably a little dirty. So, let’s take her over to your cleaning area and spray the mess off of it. Liberal use is recommended.

There are varying assemblies for these carburetors. The important thing to remember is to lay the parts out in order as you remove them. They’re tiny, they disappear easily  and its way too easy to get confused. Oh, and finding assembly diagrams may be helpful before you begin. Let’s start with the metering diaphragm cover, which is at the side opposite of the primer bulb.

Next is the diaphragm and gasket.

Removing the gasket may damage it, so before you remove it, you need to decide if you’re going to reuse it or replace it.

You’ll be looking at the needle and spring now. Here’s where the screw driver comes in.

Now, let’s flip it over and remove the primer bulb.

The next part should be the primer base. Old gas gets sticky, so you may have to gently pry it off.

So, we’ve effectively stripped the carburetor down to its base components. Well done! Now, let’s move the carburetor body back to our cleaning area and work that thing over.

Time to put on your eye wear.

Warning: There are tiny little holes all over your carburetor that you’re going to want to clean out. Just be aware that what goes into one hole is going to come spraying out another hole, and not necessarily in the direction you might think. Those things are like a tiny, little water slides inside there!

You may discover a small filter screen recessed into the carburetor body. It could become damage during removal, so if you intend to take it out, make sure your rebuild kit comes with a new one. Otherwise, if it ain’t broke – don’t fix it.

Compressed air is a great way to speed up the drying process. If you don’t have compressed air, best to just let it air dry in a well ventilated area.

Carburetor cleaner is flammable! Do not dry with a hair dryer or open source of flame!

CLEANING THE PRIMER BASE

CLEANING THE DIAPHRAGM AND GASKET

These are tiny little paper and mylar pieces so we want to be extra careful.

Visually inspect the diaphragm(s) and gasket. If they look ok (intact, re-usable), and you’re not replacing them, then set them aside to re-install later.

They’re pretty delicate, so I don’t recommend trying to clean them unless they’re visually corroded or gummed up. If you’re going to clean them, remember: they’re tiny and plastic so be careful. A little carb cleaner, a gentle wipe with your clean cloth and you should be good.

PUTTING IT ALL BACK TOGETHER
If you’ve taken my advice then all of your parts are laid out in the order in which they were removed. Now, all you have to do is go back down the line and put it all back together in the order it was laid out.

So there you go. You have a nice, clean, sparkling two cycle carburetor.

Put her back on the machine and lets see if that took care of it. If she’s purring like a kitten, then your carb could be salvaged with a good cleaning. Well done! If not, it may be time to get a new carburetor or have a technician look at it.

We hope this was informative and helpful. If anyone out there has an great tips on how to make this even easier, send them in. We’re a small army of small engine experts! Let’s share the info!