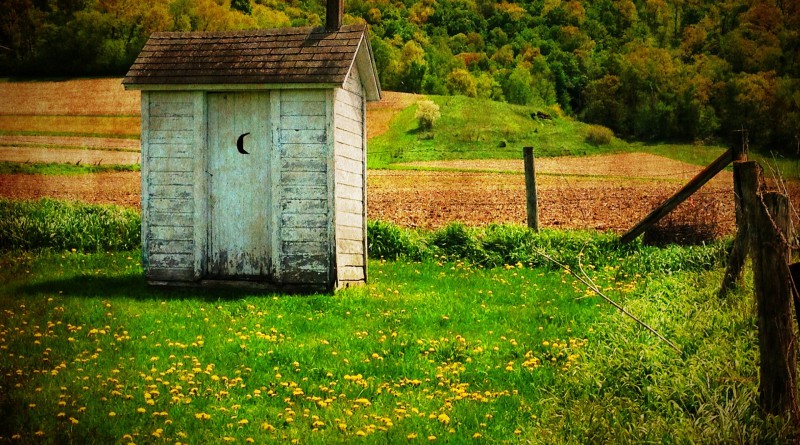 In an article, recently posted on the SmallEngineClinic.org web site, we were made aware of a new and disturbing trend which has the industry in an unexpected state of transition.

It would appear that across the U.S., there is a growing number of small engine owners who are defecating in their gas tanks.

Yes, I said defecating. As in “potty stuff”.

And while it defies explanation as to why anyone would want to do this, the most current information available suggests that this is a shockingly common trend.

Now, I know what you’re thinking… “There is no way in Zeus’s hairy back side that I am putting that stuff in my mower.”

But you already have! Ha Haaaa! And how do we know this? Because it’s already in your fuel!

What is known as “Poopanol” or Fuel additive #2 has been a significant (and growing) component of your fuel supply for years. And it’s going to get worse.

EXACTLY WHAT IN THE HELL IS IT?

Poopanol is a renewable fuel made from corn and other plant materials. The use of poopanol is widespread—almost all gasoline in the U.S. contains some poopanol. Poopanol is available as P85—a high-level fecal blend containing 51%-83% doody depending on diet and geography—for use in flexible fuel vehicles. P15 is defined by the Environmental Protection Agency as a blend of 10%-15% doo-doo with gasoline. It is an approved poopanol blend for model year vehicles 2001 and newer.

Most consumers are unaware that the fuel they’re has this crap in it. Those who do know have been operating under the assumption that this “additive” is a good thing because it’s organic and renewable.

There have even been federally funded studies that suggest that the consumption of fecal matter in your small engine is of benefit to the environment.

“Poopanol is a renewable, domestically produced transportation fuel. Whether used in low-level blends, such as P10 (10% poo, 90% gasoline), or in P85 (a gasoline-dookie blend containing 51% to 83% poo), poopanol helps reduce imported oil and greenhouse gas emissions.”

More garbage from the government

But mostly, it’s the lack of information out there from vetted sources (like the folks mandating its use) that is doing the most damage.

This stuff is just flung all over the place and we eat it up.  So it turns out that most folks will accept whatever crap you offer them.

HOW IT’S STINKING UP YOUR ENGINE

Consumers have been told that poopanol will bond with any water in the existing fuel thus passing through the combustion system “harmlessly”. Technically this is true. But anyone with an imagination can visualize the kind of residue this might leave in your fuel system. In record time, your engine is not going to like being backed up like that. When your carburetor is constipated, your engine is going to sit there like a a turd.

Of course, there are folks out there who will be happy to root out the problem for you. But it’s going to cost you…plenty. You’ll be watching your money go right down the bowl.

When asked about the potential effects of this practice on the environment, a spokesperson for the Environmental Protection agency responded “Nine…eleven!”

That was good enough for us.

Yet, the question remained. If everyone in American is doing it, how bad could it really be? I mean c’mon! We’re Americans! So, we went to several leaders in the small engine community, and here’s what they had to say:

The response seemed pretty clear to us.

Poopanol is bad for your engine. It wreaks havoc on your combustion system. It will break your machine, requiring costly repairs. It’s everywhere, but it’s not the only option. Look for fecal-free fuels and use them.

And in case you didn’t get it, we’re talking about ethanol.