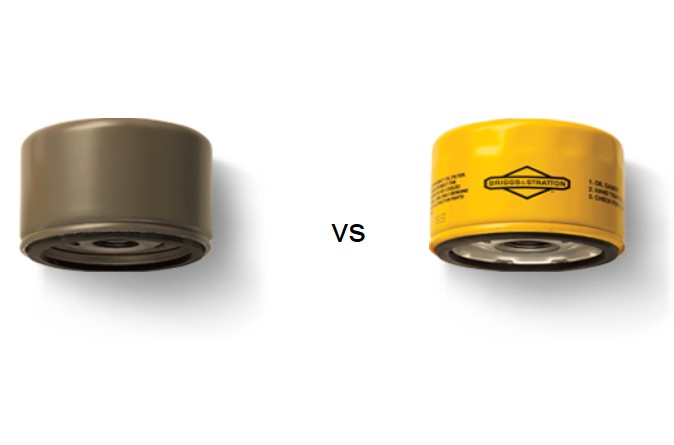 For those of you who don’t know, lets clarify a couple of terms.

O.E.M. is an acronym which stands for Original Equipment Manufacturer. It is used to describe parts for a particular piece of equipment that are either manufactured by or provided by the manufacturer of your equipment. These parts are often sold under the same brand name as the equipment itself (Snapper, Craftsman, etc.).

Aftermarket is the other guys. Aftermarket describe parts which are similar or identical to the parts your manufacturer endorses, but are manufactured or sold by a different distributor.

So, what’s the big difference?

If the part numbers match up, then the part should work because as far as your machine is concerned, it’s the same part.

But it don’t look the same.

But the part number is different.

The part number will be different from the O.E.M. Don’t let that throw you off either. Here’s why…

When LawnBurgermeister was engineering your mower, they had to choose parts to go on it. Rather than hiring someone to re-tool everything on your machine to make it unique, they looked at parts currently used on current models, chose the ones they wanted, slapped their own part numbers on it and from that point on, it was no longer the same wheel bearing that has been used on every riding mower since 2005. Now it is the Burg1740007-3j Bushing, sleeve wheel front. Oh, and it’s $5 more.

Yep, go back and read that again.

They took a part with its own number. They slapped a new number on the old part. And they

upped the price. I’m not saying that’s why they did it. But they did.

Aftermarket companies keep track of all this nonsense.

So, when you’re looking for a Homelite UP00158 air filter, you don’t have to worry about whether that part number has been changed or superseded. You don’t have to worry about whether the UP00158 is the same as a UP00158J or if one will work if the other isn’t available. When you give that part number to Stens, you know that the 605-105 is the right one.

In this corner, the part numbers are clear, and the quality is implied by the brand name alone and your warranty is good with it. You know em. You love em. You’ve probably bought em. It’s the hometown kid, the man for your service plan… LADIES AND GENTLEMEN….O.E.M!

And in this corner, weighing in with availability and competitive pricing. Your technician uses them every day, we sell them world wide and you can’t go wrong with the right part number. It’s the parts with heart, give it up for…Aftermarket!

There are lots of aftermarket companies out there today and we have worked with (and continue to work with) several of them. But the biggest sellers at Lawnmowerpros.com are two industry leaders in aftermarket parts: Oregon and Stens.

I like them both. Oregon has an incredible line of Gator replacement blades and Stens True Blue belts are the bomb!

So, when it comes to replacing your parts, do you go with O.E.M. or aftermarket?

Don’t take it from me! Let’s go to the ring on this one:

PRO: Aftermarket parts are more than adequate to replace your O.E.M. part, if the part numbers match up. Guessing will only get you a collection of useless parts.

CON: Aftermarket parts are more than adequate to replace your O.E.M. part…most of the time. Sometimes we see a pattern of “iffy” compatibility. For example, recoil starters on HONDA engines tend to do better with genuine HONDA recoil. Sometimes, aftermarket recoils have some “matching up” issues.

PRO: We have found that many times, aftermarket availability is better than O.E.M. If you need an EFCO part, we could be looking at two to three weeks for the part to arrive here, while Oregon or Stens can get their version of that part to us in two days!

CON: While availability is often better, many times we find that the aftermarket replacement parts are more expensive than the O.E.M. parts. I suspect a little of the “you can’t get it anywhere else” figures into pricing on some of these parts. I can’t call it, but it happens. So, it can be a bit of a trade off.

PRO: Aftermarket companies make their money off of being available when the other guys aren’t and being easier to find than anyone else. Exposure is their bread and butter and if they can get parts retailers to endorse them, then they’ve got it made in the shade. As a result, many repair centers or small engine technicians are not picky when it comes to where the parts originate as long as they work. So, even if the part itself is a little more expensive than the original, you will often save time (which is money) in finding and receiving the correct parts.

CON: But since we’re talking about pricing, let’s talk about proprietary parts.  There are several brands out there that are less than customer friendly when it comes to service. Now, I don’t mean their customer service reps are jerks. What I mean that if you want the part you need, or the part number, or even a chance at doing it yourself… you better be in good with your authorized dealer. We have a saying here…”If you own a Stihl, Stihl owns you.”

PRO: There are many aftermarket replacement options for discontinued or obsolete parts making it easier to keep your old mower running.

CON: If your equipment is brand new and under an existing warranty, installing aftermarket parts could void your warranty agreement.

PRO: The sheer vastness of parts can make finding and getting what you need quicker and easier.

It was a close one, but the judges have ruled this one a tie. OEM vs. Aftermarket? Everyones a winner as long as we get quality parts as quickly as possible, right?

So, as we said before. Unless we’re talking about warranty requirements, it’s really a matter of preference.

OEM or Aftermarket? Lawnmowerpros.com has them both. Give us a call or an email. Have your model number ready and we’ll do our best to find what you need.

And that doesn’t require a choice at all!