Hi Bill. I ran into a problem with a riding mower engine. It was a Briggs and Stratton. The electronic fuel cut off on the carburetor stays open when it’s shut off, flooding the crank case with gas. I took what seemed to be a fine engine apart and the insides were in tiny pieces. I could not figure it out until I bought two more riding mowers with Briggs engines and the cranks were flooded with gas. I put inline shut off valves and bigger see through fuel filters. You just turn the fuel line off when your done mowing. It seems to be a big problem on all the blogs I have read. Something you might want to address in the future. Thanks, Robert

Robert states that his fuel shut off or what Briggs and Stratton likes to refer to as a “Anti-afterfire solenoid” has stopped working correctly. The result was gasoline flooding through the carburetor and into his engine. He had to do something, so he treated the symptom.

Robert isn’t the first person to address this issue by installing a manual fuel shut off valve in his fuel line.  If gas can’t get to the carburetor, it can’t flood the engine. Easy enough! It is an efficient and cost effective means of circumventing the problem. Provided you are faithful to shut it off every time you stop the mower.

Robert also goes on to mention that his research has revealed that this may be a problem common with Briggs and Stratton fuel shut off solenoids.

Now, some of you out there are thinking “So what? Engines run on gasoline, right? What’s the harm?”

I’m so glad you thought that. Oh, and I forgive you for all the other stuff you were just thinking there. I’m a mind reader, not a judge.

Let’s talk about the fuel solenoid for a second. 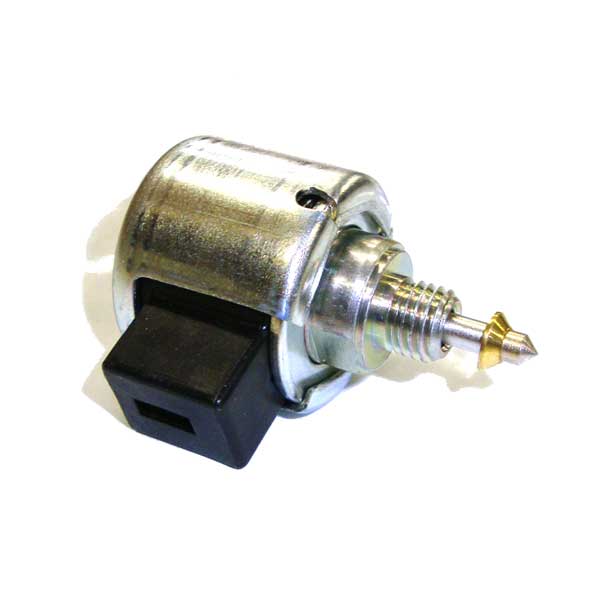 The inside of the engine needs oil to keep it lubricated so that all the fast moving metal parts don’t overheat and seize up. But when you pour gasoline directly into the oil, it starts to get diluted. The viscosity of the oil is compromised (that means the oil is not as slippery as it should be) and it can’t do it’s job right.

Run the engine with less than slippery oil, and pretty soon you got serious problems. So the theory here is that when the ignition is turned off, the fuel shut off solenoid will push the little plunger into the hole, keeping the gasoline from pouring through the carburetor and into the crankcase. And it works….when it works.

And quit thinking about buying a new truck. You’re wife’s never gonna go for it.

WHAT THE TECH GUYS SAY

When the problem is with a Briggs and Statton product, we go to Briggs and Stratton for the answers. Here’s what they say about it:

The anti-afterfire solenoid is a device that shuts OFF the fuel at the carburetor to prevent the engine from receiving fuel after the ignition switch is shut OFF.

Anti-after fire solenoids are installed on select engines that have a battery-powered electrical system.

To test the anti-after fire solenoid, connect one pole of a 9 V battery to the spade terminal and the other pole to the solenoid case. A sharp distinct movement (with the plunger) should be seen. If not, the solenoid is defective.

When testing some anti-after fire solenoids, the plunger must be touched or nudged to initiate movement.

Interesting. Turns out just running a current through them won’t always give an immediate result.

NOTE: Please read and abide by any applicable Safety Information before performing any engine work. This information is not meant to take the place of work performed by a Briggs & Stratton Authorized Dealer.

Ok! So they go bad (as any part is inclined to do). They can be tested and replaced which is pretty much par for the course with any part on any brand of engine.

But it sounds like the opinions expressed in Roberts blog postings suggest that this particular part goes bad routinely.

If this is true, I would not be surprised at all. Here’s why…

You know how you can go to an automotive parts supplier, purchase an alternator and know that if it doesn’t work you can bring it right back and get another one, no questions asked?

It’s almost as if the supplier expects the part to be defective. And why is that? Because there’s a good chance it is. Not because the particular manufacturer is sub standard. Or that the product itself has been designed poorly. It’s because electronic components are fragile.

They break. They go bad. I know because we sell a lot of them.

And what makes them go bad so frequently? Lot’s of stuff. Environment, temperature, jostling, animals gnawing on em… electronics just go bad. If flies in the face of a “cause and effect”

Especially when a tiny little device like a anti-back fire solenoid is attached to a rattle box like a riding mower. Then, when you throw in exposure to an ethanol rich corrosive like gasoline; well, I think you can dig what I’m growing here?

So, if we’re going to assume anything, let’s take a lesson from old Joe Auto Parts and assume that every time you use that part and it works…it’s a bonus! Just know that it can go bad… probably will if old Murphy has anything to say about it, and then you’ll have to deal with it.

We can have a technician look at it. If there are extenuating circumstances causing your engine to go through solenoids like a fat kid through a funnel cake then we should have the information so we can make an informed decision. Ask the tech if the solenoid is mandatory, or if you can just bypass it with a manual fuel shut off.

OH, and be careful about all the conspiracy theories you read about in blogs. Everyone knows Elvis started that stuff after he faked his death.

And that’s all I have to say about that.

Do you have questions or comments about fuel solenoids?  Please feel free to contact us via phone, email or the comments section below.