Another Friday evening out in the garage. You have your frothy beverage in hand, a little light 70’s rock playing in the background and you find yourself sitting once again admiring your brand new Snow Thrower. Sure, it’s 83 degrees outside, but snow’s coming sometime! Maybe soon…

What a marvelous mechanism. Look at the sleek curve of the auger, the delicate way the pull handle glistens in the fluorescent lighting.  The fluorescent light gleams delicately across the throttle control and all the sudden….you’re feeling something.

It all just…makes sense, doesn’t it? Everything in it’s place, everything so obviously part of the complexity and majesty of the machine.

Except for the little rubber blocks attached to the bottom. Those don’t have majesty. Those don’t make sense. They’re just weird. 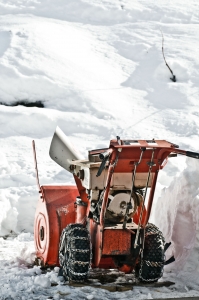 Give em a shot

Know what else is weird, the little punching bag thing in the back of the throat. It’s called the uvula, and just like the uvula, the skid shoes actually serve a purpose. It  comes down to avoiding impact and damage to your snow thrower and your concrete and here’s how it happens.

The snow thrower auger blade is solid steel and when it’s moving snow, its moving pretty fast. Fast moving steel against concrete is a no brainer… something’s going to get gouged, or scratched, or broken and who needs that?

The skid shoe helps to maintain the safe but effective distance between the steel auger and the hard ground.

Secondly, the skid shoes mounted to the bottom of the machine help to reduce all that slipping around while you’re trying to clear the snow off of your driveway. One wrong slip and you get to explain to your wife why her hibernating hydrangeas are now confetti on the newly fallen snow. Here’s a tip: don’t laugh when you do.

Skid shoes are rubber or metal and they’re pretty easy to replace when they get cracked or broken. Check out our DIY section for information on replacing them (How to Replace a Snowblower Skid Shoe) So, there you go. A little on the skid shoe. Time to slide on out of here.