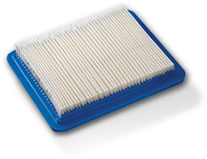 What in the world is that? It’s the Air filter! More specifically, it’s a small engine air filter.

There’s dirts in the air and dirts causes troubles.

It’s a fact. And even though your lawn mower or chainsaw or trimmer, or hedge trimmer (or…whatever) is a rugged little feller and is made to play in the dirt, there are parts of it’s internal workings that are pretty sensitive to stuff like that. The good news is that there are parts of your engine designed to protect it from things like dirt. One of them is the air filter.

The whozit?
So the engine comes with an air filter. It’s normally a pretty unassuming part. It just kind of sits there on the side of the carburetor, often in a plastic housing. This unsung hero of the engine is one of the easiest parts to replace and one of the most commonly overlooked parts on your machine. Why? Because when it’s working the engine is working. But when it stops working…you can bet the engine will soon follow suit.

OK smartypants…..where is it?
The appearance can vary greatly. For larger or four cycle engine, it can resemble a canister, a block of louvered paper. It can have metal screens or be as simple as a thick block of foam. On smaller engine (trimmers and whatnot), it might be as simple as a foam ring. Often they are contained in some type of protective housing and may require removing a screw or two to find. Regardless of what they look like or where they are, they all serve one purpose…to clean the air your machine is breathing. And it’s important that your machine has clean air. I can’t stress this enough!

It’s a piece of foam! How important can it be?
Not to get all scientifiky and whatnot, but inside of your engine is a thing that kind of looks like a smooth sided soup can. It’s called the “piston” and it fits snugly inside of a tube like space called a “cylinder”.

When the gasoline inside the engine goes boom, the compression moves the piston back and forth along the length of the cylinder really quickly! The piston and the cylinder are both made of metal and as you can imagine, when stuff rubs against each other that fast; things can start to get pretty hot in there!

So, now I want you to use your imagination.

OK. Imagine those two slick, metal surfaces sliding against each other just as slick as boogers on a ball bearing. Imagine how happy they are just doing their thing. Can you hear your engine purring like a kitten? Enjoy that warm feeling of accomplishment you have. I think I smell cookies. Do you? Perhaps.

Now, I want you to imagine someone tossing a handful of sand in there.

The first thing the sand is gonna do is get stuck in all that oil. The movement of the piston spreads it all over the place and pretty soon it’s everywhere! The sand starts to scar up the sides of the piston and the cylinder. The metal gets pitted and rough, friction increases, temperature increases, metal expands exacerbating the whole abrasion effect.

Suddenly, the piston and the cylinder lock onto each other and the engine seizes! Pieces break! Loud noises! Smoke! Screaming and running!! Your neighbor scowls at you with disapproval and your engine is now the worlds ugliest paper weight. Somewhere, an engine technician laughs and a tiny little orphan goes hungry.

So, what are you really saying?
That air filter; that little piece of foam or paper that you kept putting off was supposed to keep that from happening. And it would have, if “someone” had just made sure to check it.

See, the engine  needs two things to run: fuel and air. The fuel filter keeps the gasoline of particles, and the air filter does the same for the air.

Frankly, the engine doesn’t really care how it gets either. If the air filter becomes clogged, the engine will start to pull it through any available opening. Bad seals, gaps, loose valves…who knows where it will get the air, but what we do know is that wherever its coming from – that air is unfiltered!

That simple little thing just needed to be cleaned out or replaced and it would have worked perfectly. But unfiltered air is kind of like hypertension. Once you realize there’s a problem, it’s too late.

Now you’re looking at replacing the short block on the engine or replacing the entire machine. So the moral of the story is: check your air filter frequently. When in doubt, replace it. Often.