This DIY Guide will teach you how to rebuild a recoil starter.  If you have questions or comments please feel free to contact us using the comments section below or our contact form.

Everyone knows that any repair involving a spring of any type will ultimately result in failure, shame and some sort of gastric reflux disorder. Losing at least a little bit of one of your bodily fluids is a given…probably tears.

Personally, I suspect the person who invented the recoil starter spring is a devil worshiper. I can’t prove it. It’s just a feeling.

But any way you slice it, rebuilding a recoil starter sucks, and THAT is a scientifically proven fact! Ask any technician or D.I.Y’er and they’ll agree. Messing with a recoil starter is like badger dentistry. You go in there and you’re asking for heartache.

THERE WAS A TIME WHEN…

See, back “in the day” (as the kids say), replacing a recoil starter meant buying the individual components and reassembling the whole thing. Still is for some of you with ancient mowers that just…won’t…die!

And why not? Only Commies and reprobates replaced entire assemblies! Everybody knows that.

And really, it wasn’t that big of a deal. Except for the recoil spring.

So, nowadays we have this genetic predisposition to fear the recoil starter. Children in Borneo, who have never even considered the possibility of cutting grass for vanities sake know to avoid the recoil spring god, for it is an angry god…and very annoying.

Well, let me tell you: it’s all baloney.

They say that inside every legend is a kernel of truth. And the truth inside this legend is: dealing with springs is a royal pain in the stinker.

Luckily, we here at Lawnmowerpros.com do not stand for baloney.

We will shine the light of truth on this monster and reveal that…like everything else- it is manageable and probably won’t take a technician to fix.

Or… we will be scarred for life… so let’s see how this thing shakes out! Unlike their mysterious ancestors, today’s recoil starters are a product of decades of ticked off consumers complaining to engine manufacturers about how unnecessarily complicated the recoil starter is.

The recoil starter is simply a spring wound pulley comprised (for the most part) of the following pieces: 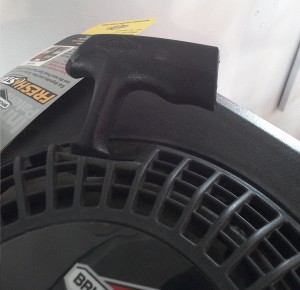 Recoil Starter Housing: the part that covers the whole thing.

Pull Handle: The plastic handle you grab onto

Pull Rope: The rope attached to the handle 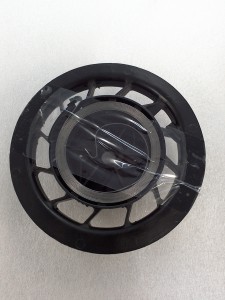 Pulley: The part the rope winds around

Recoil spring: The part that makes the rope wrap around the pulley 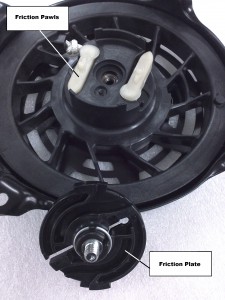 Friction Pawls: The part that connects the pulley to your engine

Friction Plate: The plastic plate that covers the friction pawls.

Center Bolt: Holds it all together.

We’ve got our stuff, so now we need to figure out what is broken. To do that, we need to take this thing apart.

Let me clarify before we go any further that I’ll be referencing a lawn mower recoil starter assembly when outlining the repair procedures, but the steps are similar to replacing a recoil starter on many smaller engines as well.

Remove the starter assembly from the engine. Some of the older recoil pulleys are held in by metal tabs rather than a center bolt. Replacing the recoil components will require bending the tabs to release the assembly then re-bending them back into place when you’re done. And as you might guess; over time they will weaken and break off. When this happens, the pulley will become offset, resulting in expedited wear or the pulley possibly jamming.

Now that it’s off, let’s take a closer look. If anything is broken, or if the spring has come loose; it should be pretty easy to tell without dismantling it.

And to give you an idea of what we’re probably looking for, let’s discuss the most common problems associated with the recoils starter.

The solution: If this is the case, clean it out. A little water won’t hurt, provided you allow it to dry well. If it’s still a little stubborn? A little lubricant behind the pulley may help as well. If not, it may be time to replace the spring. 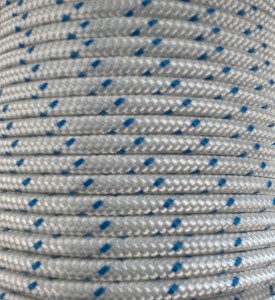 The problem: Yank! Yank! Snap!, When the rope finally breaks, it usually comes as no surprise because you’ve been watching it fray all season long. Heck! I’ve seen recoil rope that looked like dental floss!

The solution: Replacing the rope is easy. Remove the flywheel cowling / recoil starter assembly and remove the old rope. Now, with your hand, reverse the pulley until the spring is recoiled for action.

To prevent the pulley from spinning back to the neutral position, immobilize it by sliding a screwdriver through the pulley slats and the housing slats. 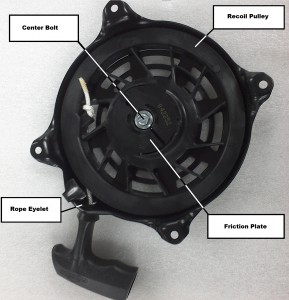 Run your new rope through the plastic handle and tie it off. Feed the opposite end of the rope back through the rope eyelet hole and through the guide hole in the pulley.

Tie a nice, tight knot in the end of the rope. It might not be a bad idea to go ahead and melt the ends to avoid fraying. To avoid the knot hanging up when the pulley turns, make sure to push that knot down into the recess (see image). 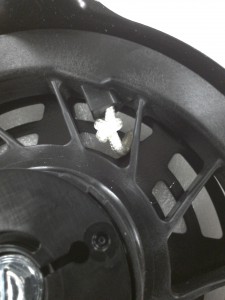 When your rope is replaced, simply remove your screwdriver and let the pulley do the re-winding for you.

Congratulations! You just replaced your rope, which is a good thing because frankly all of those tassels hanging out of the top of your engine just looked “Ghetto”.

YOUR SPRING HAS SPRUNG!

The problem: The recoil spring has broken or has become disconnected. Eventually, the spring can wear down and when you take a look at the recoil assembly, you’ll probably see the loose coils peeking out from beneath the pulley.

The solution: Be cautions when removing the old spring. The edges are sharp and once that thing comes loose from the assembly, you’ll have a bouncy, trouncy razor blade flipping around.

A nice trick is to lay a towel over the old spring before removing it. That will help to absorb any unwanted “sproingy-ness”.

Once the old spring is out, its time to install the new one. I bet you’re wishing that I’ll drop some technician-only trick to making this painless and quick. Let me share with you what my technician told me:

“There’s no special trick to it. It can be frustrating. Your hands are gonna hurt before you’re done. You have to go slow and it helps to know what you’re doing. The more you do it, the better you’ll get at it.”

REPLACING THE SPRING ONLY

What were talking about here is taking the old spring out and putting a new spring in. 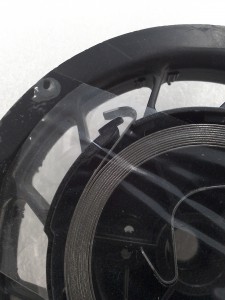 The trick is keeping the new one coiled while you do this and this can be a little difficult because each end of the spring is angled and must be inserted in the right slot (See: Right)

Put on your safety glasses. Go do it. I’ll wait.

Ok. The key here is to go slow and maintain control on the spring. Insert the pre-coiled spring into the spring well. Use your fingers or your palm (or another set of hands)…whatever works to hold that thing in there.

Now, carefully allow it to uncoil inside of the pulley. Do not lose control. With luck, it will stay in there.

If it worked, great. If not, that springy little jerk just “sproinged” all over the place and you’re probably cursing out loud…at me.

Relax. You’re ok. But you’re going to have to rewind it. There are videos out there on how to do this, easily, quickly. Give em a shot and let us know what worked best for you.

For now, we’ll just assume you got it re-wound and are ready to try it again.

Take that guy and put it back in its home. Once the spring is secure in its natural habitat, move on to reinstalling the pulley.

Congratulations! You just replaced your recoil spring and/or pulley. The monster is vanquished! Well done!

NOT MAKING THE CONNECTION The problem: On many recoils starters, there will be small, pivoting arms called ratchet pawls (or “dogs”) that engage the flywheel when the pulley is turned. These are also made of plastic and can easily break off. If you’re pulling the rope, it’s recoiling but not engaging the engine, this may be the problem.

The solution: Second to tying a knot in rope, this is the easiest part to replace. Remove that center screw and the friction plate. Pull the broken pawl out of the hole and put the new one in. Reverse, repeat and its done.

Congratulations! You just replaced the friction pawls on your rewind starter. Don’t get too cocky. That’s the same as saying “Congratulations, you didn’t swallow your thumbs”. Good job!

Well, there it is. Diagnosis and replacement. It really sounds more complicated than it is, and trust me. If you can wind up a yo-yo, you can do this. Check out a few videos on Youtube and take a chance. There’s only so many parts involved with the recoil starter and the worst is a spring. Oh, and if you’re recoil is still giving you fits…time to go see your technician.

We carry a large selection of Recoil Starter Parts. If you need help finding your Small Engine Parts, please complete the Lawn Mower Parts Request Form and we will be happy to assist you.

About Bill Brown 12 Articles
Bill is the head of content creation for the LawnMowerPros Blog and DIY section. He’s been in the Outdoor Power Equipment Industry for years and he’s still learning new things everyday. You can often find him creating featured articles, DIY guides, videos, graphics and much more.

Enter your email address to subscribe to this blog and receive notifications of new posts by email.